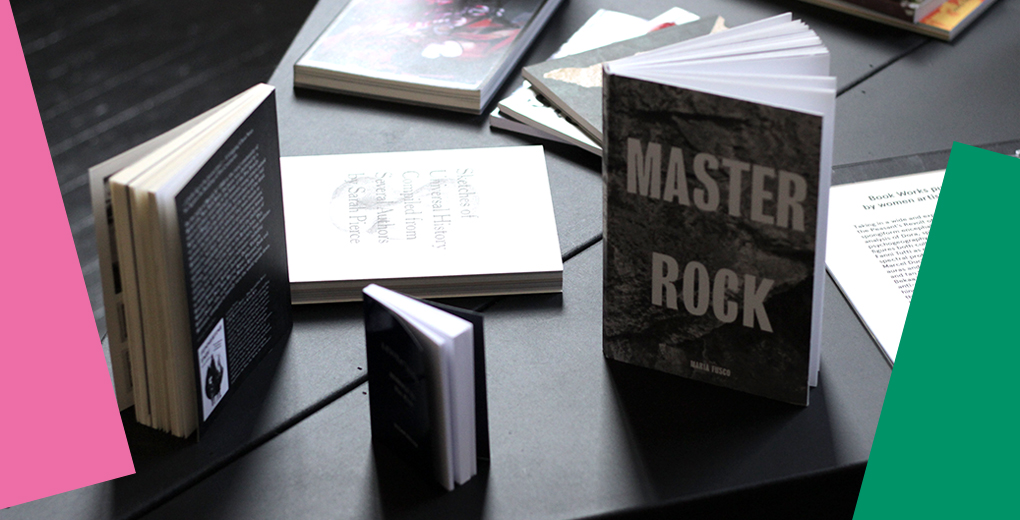 For the first Speaking Volumes event, on April 14, we were delighted to welcome writer Maria Fusco in conversation with artist Sarah Tripp. The event took place at the amazing Glasgow Women’s Library space during our exhibition Speaking Volumes. For it, Sarah and Maria brought a wonderful insight to the discussion around books by women that have had an impact in their creative practices through a conversation focusing on expanded and performative forms of publishing.

This event also marked the Glasgow Book Launch of Master Rock by Maria Fusco, co-published by Book Works and Artangel, 2015. Master Rock is a repertoire for a mountain, first recorded live inside Cruachan Power Station, and broadcast on BBC Radio 4; the words in the book are an edited version of Maria Fusco’s original script alongside archival images of Cruachan..

Maria Fusco is a Belfast-born writer based in Glasgow. A Reader at Edinburgh College of Art, University of Edinburgh and was Director of Art Writing at Goldsmiths, University of London. Her work is published internationally and has been translated into ten languages. Maria Fusco has been awarded as one of Canongate’s Future 40 and is a Hawthornden Fellow. Maria Fusco is one of Book Works’ frequent collaborators. She is founder and editorial director of The Happy Hypocrite journal, published by Book Works.

Sarah Tripp is an artist based in Glasgow. Her practice incorporates writing, video, performance and teaching. When making works she plays with modes of attention, episodic structure and tones of voice to create proximity to, and distance from, characters.

Sarah’s most recent works You are of vital importance (Book Works, 2014) and 24 Stops (Camden Arts Centre, 2013) adopted multiple forms over several months existing as publications, broadcasts and live performances. From 2008 to 2014, Sarah co-edited five volumes of the pamphlet Gnommero. Sarah is a Lecturer on the MFA Programme at The Glasgow School of Art. She is currently in residence at Lux Scotland where she is developing a programme for the Artists Moving Image Festival 2016. In 2017, she will develop a work across multiple forms with Edinburgh Sculpture Workshop and publish a new book with Book Works.

Maria Fusco and Sarah Tripp are both frequent collaborators of Book Works.

Book Works was a special feature of Speaking Volumes, with a special display of their work by women artists and writers. Jane Rolo and Rob Hadrill established Book Works in 1984. Based in London, Book Works is an art commissioning organisation specialising in artists’ books, spoken word and printed matter. Book Works supports the creation of new work by emerging artists with projects initiated by invitation, open submission, and through guest-curated projects. At Speaking Volumes, Jane Rolo will be introducing Book Works as a publisher, and discussing recent and future projects in different library locations.